Год выхода: 2011
Выпущено: Bluebird Films
Жанр: All Sex, Big Tits, Threesome, Oral, Straight, Group Sex, Stockings
В ролях: Angelica Black, Tarra White, Rebecca Ryder, Harvey Jay, Christine Love, Cindy Behr, Amanda Black, Farrah Fox, Jasmine Black, Britney
Music is not the only these girls want to play with! 10 Hot girls just waiting to be in the music industry. Watch them all try to get there! Radio host Ben Dover is shooting a webcam podcast in his studio and invites a couple of guests to his show. Amanda is an up and coming singer from Romania and is promoting her new album in Bender's studio. She gives a little strip tease for the webcam viewers and wants to demonstrate the host and the producer what other talents she possesses. Two nuns, Jasmine and Tarra, are looking for Ben Dover to assist them with a special request they have but instead they find two other colleagues that are willing to help Jasmine and Tarra with their needs. Girl duo Angelica and Britney have a new record and are at Ben's show to do some promoting. But instead of promoting their album, Angelica and Britney decide to have some hot, wet fun with their mouths. Christine is looking for some assistance from Ben for charity. Ben would love to help but needs some convincing and Christine is willing to do anything for Charity, even if it means being DP'd! Harvey and Rebecca are the admin girls at Radio and recently have not been performing their task correctly, so Ben decides to punish them the only way he can think of. Cindy and Farrah are in a punk band making their way to Bluebird studio so that Ben can play their new record on the radio but Ben needs some convincing before he helps these girls. 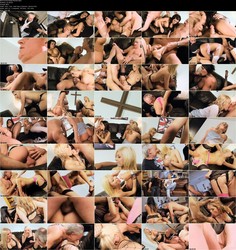